The latest projects, news and events at Bowen Collins & Associates.


BC&A is working with the Church of Jesus Christ of Latter-Day Saints and the design team of architects, planners and engineers to reconstruct the historic Provo Tabernacle in Utah County. BC&A is providing site civil engineering for the project.

The Tabernacle was originally constructed in the late 1800’s and was used as a tabernacle until it was struck by a fire in December 2010. To read more about the impressive historic preservation and reconstruction click on the link below:


BC&A was awarded the Utah APWA 2013 Project of the Year for the McGhee Springs Tunnel and Pipeline Rehabilitation Project!  The project was completed for the City of Murray.  Congratulations to Mr. Cody Moultrie who managed and oversaw the design of the project. 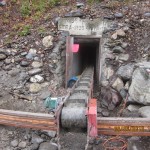